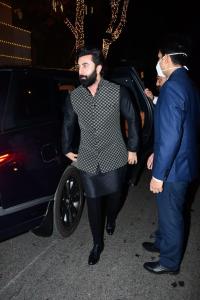 On December 29, India’s richest man Mukesh Ambani’s youngest son, Anant Ambani, got engaged to Radhika Merchant. While the engagement ceremony happened in a close-knit affair in Rajasthan, the Ambanis have now returned to Mumbai.

On Thursday, the Ambani family hosted a grand engagement party at their Mumbai residence Antilia where many Bollywood celebs marked their presence including SRK, Salman, Alia, Ranveer among others.

While Shah Rukh Khan arrived with his manager, Salman Khan was spotted at Anant Ambani and Radhika Merchant’s engagement bash. Salman ditched his casual style for the event and opted for a formal look.

Ranveer Singh wore a peacock blue embroidered velvet jacket with a black turtle neck t-shirt which he paired with matching parallel trousers. He completed the look with a necklace, a black cap, and a pair of tinted eyeglasses.